Home » Interesting » Infographics » Where Are The Largest Data Centers In The World Located ? [Infographic]

Where Are The Largest Data Centers In The World Located ? [Infographic] 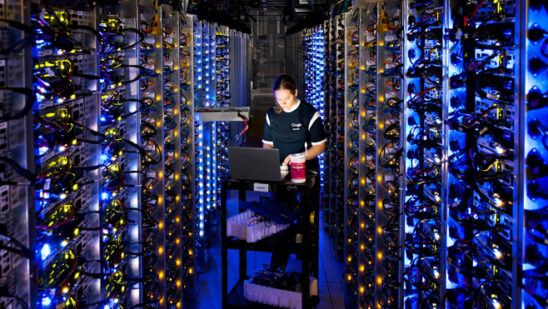 At this point, even larger companies, with their own private data centers or in-house server setups, are starting to move more and more of their computing and their websites to third-party data centers; what some are calling the migration to the cloud. The result? A huge upsurge in the size and number of data centers the world over. And with the total number of websites expected to exceed 1 billion in the coming year, anyone can see why the quantity of data centers is not only growing, but the centers themselves are becoming massive. Here today we take a look at the geographical location of the largest data centers in the world:

Some of the largest data centers in the world, and those that are just being built, house a complex maze of cooling and networking systems, beyond the hundreds (or thousands) of servers alone. Many businesses look to solutions like Firstlogic software to handle their data processing needs

For example, the data centers that are being built over the next few years make the currently largest data centers seem small. Facilities like the Lakeside Technology Center in Chicago, Illinois and the SUPERNAP facility in Las Vegas, Nevada touted being the largest data centers in the world with more than 1 million square feet a piece. Their nearest competitor usually only came in at around 400,000 – 600,000 square feet, which is still pretty impressive.

These days, though, data center companies with less than a million square feet don’t even make for being called ‘big’. There are data centers now in the works that will involve campuses of buildings with square feet totaling in the millions and they will have the flexibility to add more space as needs increase and more servers are added. By next year, centers with only 1-2 million square feet will likely have dropped off the lists of the world’s largest data centers.

But that’s not all. The map doesn’t give us an idea of places like the Data Center Alley in Loudon County, VA. According to Loudoun County’s Office of Economic Development, as much as 70 percent of the internet traffic, from all over the world, flows through their data centers every day.

Data Centers Are The Lifeblood Of Business

This might seem a tad unbelievable at first, but it becomes a little more so when you realize that traffic hogs like Microsoft, Facebook, and Amazon all rent or own some major data real estate in the area, along with about 3,000 other tech companies. And Loudoun isn’t the only place like this. Hohhot, Inner Mongolia has a facility similar to the Digital Realty Ashburn Campus and the DuPont Fabros Ashburn Corporate Center (ACC), which are among some of the largest data centers in the world with huge storage and processing capabilities, right now.

The Largest Data Centers In The World Infographic

So, in this day and age, where your website can be your entire livelihood, it is now more important than ever to be able to identify a reliable website host and stay informed about how their infrastructure works and how they’re measuring up.

The map below shows us some of the largest data centers in the world, who owns them, and how big they are in size, but it’s more than just that. You see, most small website owners and small businesses don’t choose to run their own servers due to the hassle and expense of purchasing, setting up, and managing them. It’s more cost-effective — not to mention convenient — to find a data center or web hosting company that is already running a farm of these machines and the networks we need for our sites: 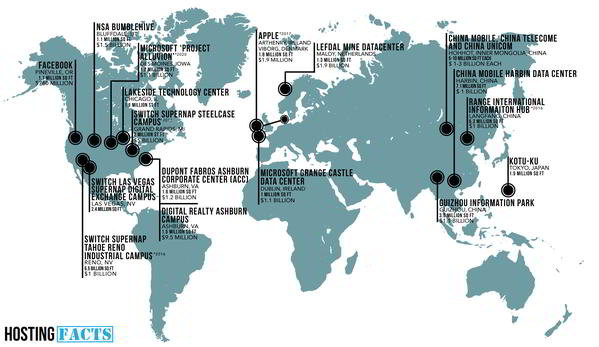