Home » Celebrities » The Unstoppable Rise of the Pop Tie-in

The Unstoppable Rise Of The Pop Tie-in 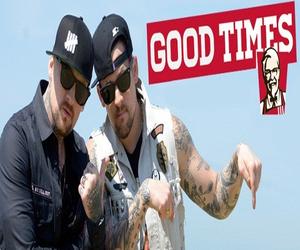 One of the weirder pop stories of recent times, Andrew WK – that guy who appeared out of nowhere in 2001, armed only with an album full of one-chord hard rock and a peculiar New Age philosophy of endless partying – was selected by the US state department to act as a kind of cultural ambassador to the troubled country of Bahrain. (Perhaps in Bahrain, they go nuts for songs like ‘Party Til You Puke’.) He was to give a couple of concerts and motivational speeches in schools and colleges, all in the name of promoting peace and harmony through “positive partying”. Declining sales in the age of piracy, and declining profit margins in the age of iTunes, have increased the unstoppable rise of the pop tie-in.

The Other Half of Pop Stardom: Sponsorship

Tragically, the US got cold feet on this bold venture, depriving us of potentially the oddest artistic contribution to international cooperation since David Hasselhoff belted out ‘Looking for Freedom’ atop the Berlin Wall. The story is an atypical example of something else, however – the increasingly obvious reliance of pop acts on extra-musical activities to get exposure and – ultimately – the hard cash necessary to make music a career.

We say ‘increasingly obvious’ rather than ‘increasing’, although the latter is true to an extent. Declining record sales in the age of piracy, and declining profit margins on sales in the age of iTunes, are widely acknowledged to have increased the relative importance of live performance. That’s only half the story though – the value of public sponsorship deals increases just as inevitably.

The main phenomenon today is that such deals are far more visible, and are conducted pretty shamelessly by the artists concerned. Nothing is more emblematic than Bono, the high priest of pop commercialism, launching the peculiar Red brand a few years ago. The idea was to get companies to sign up to put a fraction of profits on branded goods into the fight against AIDS in Africa.

What was interesting was how keen Bono, that secular saint, was to distance it from old-fashioned do-gooding:

That stylized (Red) logo was supposed to be desirable in the same way as an Apple emblem on the back of a phone, not a tax on conscience like a Band-Aid Christmas single.

And he’s got pretty good examples of ‘hard commerce’ there. In the world of mainstream hip-hop, getting your own line of trainers is almost a rite of passage for any aspiring rapper. Moral panics about rap in the 90s and after focused on the supposed glorification of criminality, with the post-NWA explosion of narratives about street hustlers and pushers. But above all, what was actually being glorified was making money.

Punk is stereotyped as anti-commercial, but that was always a crude reduction. Punk was opposed to the residues of hippie-ism in 70s rock, and its worldview was basically nihilistic. Anti-commercial ventures were one natural consequence – but so was the emergence of the new wave as a mass pop phenomenon, indeed the defining one of the early MTV era, for which style and marketability were themselves rebellions against the values of the previous generation.

Dischord Records may be an inheritor of punk, but it is no more legitimate than ZTT. When the anti-commercial strand, in the form of grunge, hit the mainstream in the 90s, bands either embraced their new stadium-filler status (Soundgarden), turned in on themselves (Nirvana), or rejected it in practice and faded into relative irrelevance (Pearl Jam).

Above all, the idea of artistic independence has simply foundered on the rock of hard economic reality. The ‘high’ arts are propped up by state or corporate funding, anyway (inheritors to the aristocratic patrons of an earlier time); why should pop be any different?

The other contributing factor to the visibility of sponsorship is the overall change in marketing practices. Iggy Pop may still appear on a billboard for car insurance, but increasingly marketing departments are obsessed with social media. Communication is two-way on these platforms – corporate brands and official campaigns alike need people to participate rather than just passively consume the advertising content for it to ‘work’.

KFC’s tie-in with the Madden brothers of Good Charlotte is emblematic – Australians are encouraged by their pop-punk heroes to contribute stories of ‘good times‘ to the relevant Facebook page. In this sort of participatory marketing, the charismatic and personal connections between bands and fans are a valuable commodity and are good for musicians and fans alike.

This brings us back to Andrew WK’s aborted Middle East trip. Is this not a very old-fashioned version of the same thing – the direct use of pop’s almost spiritual charisma? The US is an old hand at this, having pushed everything from rock’n’roll to abstract expressionism during the Cold War.

It understood, better than the artists, that even supposedly anti-commercial art was a great advert for free enterprise and the American Dream. The only thing that’s changed now, apart from technology, is that the artists have caught up with that insight.