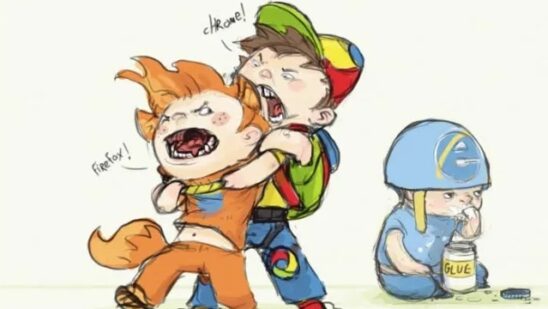 The battle for dominance in the search engine and browser market has been pretty intense, over the span of the past 5-10 years. Browsers are the only way in which traffic can move around the internet. Billions of people around the world use search engines every day, but what browsers do they use? There are now several heavyweights fighting for the top spot for the best Internet browser, on the other hand, it is arguably little or no competition on the Search Engine front (Google all the way). Internet Explorer has slipped behind Firefox in recent years thanks to a few persistent security vulnerabilities. The newcomer on the market seems intent on blowing the competition out of the water, the mighty Google Chrome has only been around for a few years but already looks set to overshadow other big names. Let’s analyze if Google Chrome has finally killed Mozilla Firefox.

Google Chrome – Is it Really Better than Firefox?

Google has put some serious research and investment into the technology required to develop the Google Chrome browser. They mean business when it comes to global domination and Chrome has been attracting a lot of positive attention from users and critics alike: Google Chrome is growing more and more popular.

It has now already reached the same kind of usage figures as Firefox despite being a relative newcomer to the market. This is thanks to the unarguable facts.

The speed of Chrome is much faster than Firefox and can offer a number of comprehensive features. Google Chrome is aiming to be the fastest browser/search engine available and with split-second start-up times it has so far achieved this goal.

On the average desktop, Firefox can take as long as 9 seconds to start up. This may not seem like much on paper, however, once you have gotten used to the speed of Chrome you will never look back.

Chrome will open up onto the most visited page as a default option which is handy if you don’t like to bother amending the settings. It also tops the table when it comes to memory usage. Memory is a precious commodity on desktops and mobile devices – You don’t want your browser using any more memory whilst in operation than necessary.

Although Chrome and Firefox use the same amount of memory to start up, Firefox is more memory intensive than Chrome during operation. Chrome is also much faster to release memory resources which is thanks to the unique multiple tab processes. Reports from industry experts have shown Chrome to be more stable than Firefox in operation and also more secure overall.

Chrome offers a useful integrated Task Manager. This is helpful if you are running a number of separate tabs. Access to the task manager gives you the option to select and close specific tabs. Chrome also allows you to view some pages just as you would in Internet Explorer with the ‘IE Tab’ feature. This is a practical feature as some web pages do require certain features from IE for enhanced viewing.

Google Chrome is gradually pushing Firefox out of its place in the market. As it continues to grow in popularity then there is a strong possibility Firefox will disappear into obscurity before long. A great pity really, as Firefox has long been the favorite for those who refuse to use Internet Explorer.