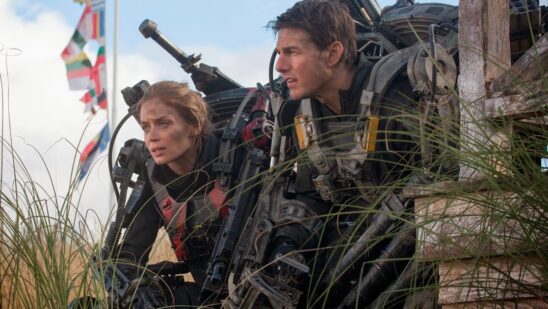 With several huge sci-fi box office blockbusters in recent years, there are still plenty of potential blockbuster science fiction films lined up for sci-fi fans worldwide this fall. Here are some of the best upcoming sci-fi movies of 2013-2014:

We’re only a month away from Riddick, Vin Diesel‘s return to the role that made him famous. David Twohy returns to directing, and the film seems to return to the original premise: the hero, alone on an inhospitable planet, attacked by monstrous creatures. If terms of screenwriting, the series promises huge amounts of adrenaline, but also some serious scares.

The fact that Riddick’s footsteps are, as usual, gangs of mercenaries ready to cash the reward for his head will only complicate things.

This genre has won over two of the most beloved personalities in Hollywood, George Clooney and Sandra Bullock in Gravity, Alfonso Cuarón’s 3D film. We’re including this title due to its scientific component: the two actors are Stone and Kowalsky, she is a doctor, and he is a veteran astronaut on his last mission in space. An inexplicable accident destroys the space shuttle during a routine mission, and the two heroes remain in darkness drifting around.

For a long time a true Hollywood mystery, the film remains a question mark in terms of extreme experience for the protagonists: since they have no means of locomotion and cannot travel in a void, how could they get out of the situation without any help from the outside?

Time travel is one of the favorite themes of the fiction genre, but we see it used in About Time as a catalyst for a romantic comedy. Not very long ago we saw the same theme being used in the romantic drama, “The Time Traveler’s Wife”, so we can’t wait to see in what other motion pictures it will be used.

Mary, the female hero from About Time, is all Rachel McAdams (this cute actress is becoming an expert in soft-fiction topics), and its temporal problems begin when she meets clumsy Tim (Domhnall Gleeson). He has the ability to travel in time and uses it to conquer Mary, but a mistake made at the wrong moment deletes any memory of their relationship in the girl’s head.

Ender’s Game is an adaptation of a much-awarded novel by Orson Scott Card and presents a bleak future of mankind when children with great strategic and tactical skills are taken from their families at a young age to be converted into military leaders needed in a war with an alien race.

Although Orson Scott Card said several times that his novel is consistently different than the scenario, the trailers seem to suggest that the differences are not so great and that Ender (Asa Butterfield) on the big screen has the same destiny as Ender on paper.

Thor: The Dark World seems more fantasy-directed, and has a consistent technological dimension. We cannot wait to see what the force of Malekith is, the new movie villain in fighting the Scandinavian god of thunder (Chris Hemsworth).

No need to say anything about The Hunger Games: Catching Fire, since it was included in included numerous tops about most awaited films of 2013. If you missed the first part, The Hunger Games from 2012, then you should definitely check it out!

Even if at the beginning of 2013, when the first images of Joel Kinnaman in the RoboCop costume appeared, we had some furious fans, we have full confidence in José Padilha, the famous Brazilian director.

By next summer we will meet with The Maze Runner, a new teen dystopian fiction with a lot of guys locked in a giant maze. The film will open on February 14 worldwide.

Edge of Tomorrow, the SF with Tom Cruise in the role of an inexperienced soldier sent in an alien war is also very expected. Once touching one of the enemies, the hero is a prisoner in a time loop: reliving the same day over and over, dying at the end of it, and starting again from scratch.