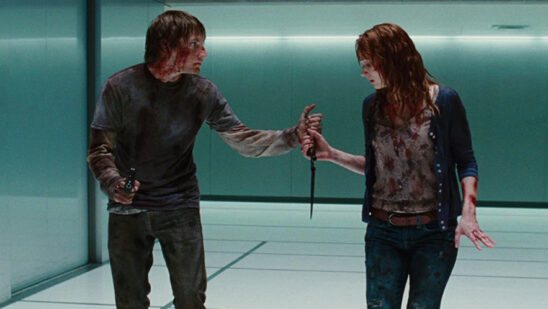 Certain film genres certain tricks, clichés, and archetypes in order to lead the audience down a certain path and to put them in the right frame of mind. There is no greater example of this than horror films, where the use of recurring ideas and situations reaches almost the giddy heights of blues music or RnB. These horror film cliches are so ubiquitous, so widely known and so ridiculous that even those that have to hide behind a pillow when they see something slightly scary on TV will know them. There are loads of these stupid horror film cliches to choose from, but here is our list of favorites:

The ‘Let’s Split Up’

So, at this point in the film, our plucky protagonists will usually know that something not quite right is going on around them. Maybe a couple of their companions have died or they have been hearing strange noises in blood-stained houses, but like clockwork, the jock amongst them decides that they should split up as it will help them figure out what is going on.

Not only does this show a stupid level of dedication to the ‘Scooby-Doo principle’ on how to get to the bottom of something, but it also results in quickening up the film’s death rate!

This cliché is especially prevalent in the ‘slasher’ sub-genre, and nearly always involves a female character. The girl will be running away from the monster/villain/murderer and will for some reason forget how to use her legs/trip over something which results in an inability to walk.

The female character then has to do a futile crawl away before eventually and inevitably getting killed.

The ‘Inability to Own a Working Torch or Bring Replacement Batteries’

This usually follows the ‘let’s split up’ and is a perfect way to kill off one of the first characters while keeping your monster or murderer hidden. Basically, the character will hear something in a dark room and go and investigate with a handy torch. Unfortunately, though, the torch itself will either blink or get dropped and break due to a cheap and flimsy design.

Needless to say, this lack of preparation or unwillingness to shell out a few more dollars on sturdy, good-quality torch results in the character meeting a grisly end.

The ‘Unheeded Warnings From a Crazy Guy’

You and your friends think it would be fun to investigate a desolate part of the woods and a cabin without an internet connection or particularly good phone reception. On your way, you are accosted by a crazy man who tells you not to do it because bad things will happen.

Obviously, you just chalk this up as the ramblings of a crazy man and go on ahead with their weekend plans. And you practically all die.

After ignoring the crazy guy, you and your teenage friends crack out the booze and weed. Two members of the group decide to have sex and are promptly killed because they couldn’t show any restraint.

The Phone Lines Are Down

Killers in films are smart it seems, so they tend to cut the phone lines. The character always goes for the landline first before realizing that their mobile is a much better idea. Unfortunately, they are too scared to push the little buttons and end up dropping the mobile down the toilet or something.

The other classic is that the character gets through but doesn’t have time to explain what is going on and has to leave the phone hanging with the operator repeatedly shouting “hello? Hello?” Some kind of IVR monster/killer identification and authority contacting system would be a great idea.

We know we have missed a few obvious stupid horror film cliches, so let us know your thoughts and favorites in the comments section below.