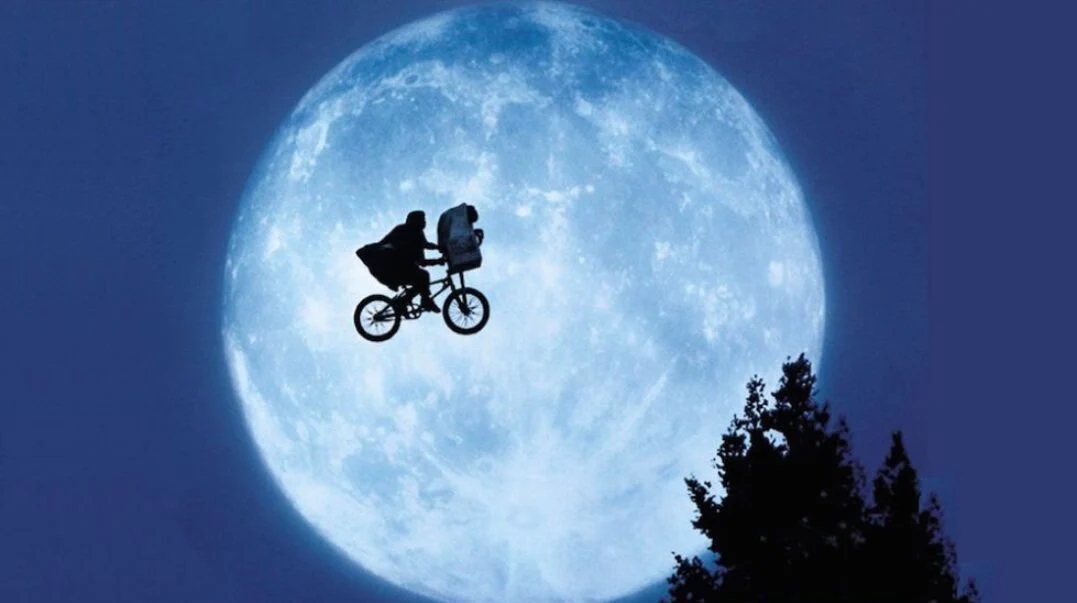 This is probably the most obvious and famous scene that a bike plays a huge part. It is perhaps the most copied, loved, and adored seen in all of the movies – so much so that the production company that filmed the movie actually was able to get a trademark on this particular image (title image).

In the movie, Eliot befriends E.T., a lovable alien that’s far from home. The final scene showcases them both biking across the sky, with the full moon in the background. They’re on a cruiser bike similar to the ones you can get for cruising down the beach, and I must admit that watching this movie as a child was one of the things that got me into bicycling in the first place.

As a kid, The Goonies was by far my favorite film of all time. I probably watched it more than 20 times by the age I was 10, which tells you a lot about how I felt about being a kid and having fantastical adventures in my life. The most exciting scene in the movie might not be the biking scene, but the biking scene is certainly memorable.

When all of these kids discover a map that points to a hidden treasure, they want to go explore – but their brother won’t let them. So, they end up tricking him and tying him into a couch as well as flattening the tires of his bike. They all hop on their cruisers and head out to the start of the map, passing a lot of beautiful scenery on their way.

The goal is to get to the coast, so as they move through the small town, eventually, they get to the forest. After the forest and the beautiful, lush foliage that it contains, they finally reach the coast and the starting point of the map. It’s one of the most free-spirited scenes of childlike wonder that you will ever see in a movie, so if you haven’t seen it, you should really check it out.

Like it or hate it, Napoleon Dynamite definitely featured a classic bike scene.  After Napoleon meets Pedro, a transfer student who has a distinctly Hispanic accent, he believes that he’s finally found a friend. They walk outside to where Pedro‘s bike is, and Napoleon is immediately floored by how “cool” the bike is. It’s called the Sledge Hammer, which actually was a very famous bike in the 1980s.

After a good couple of minutes of admiration, Napoleon asks Pedro if he can do any “sweet jumps.” They go out to the sidewalk and Napoleon sets up a small jump with some cinderblocks and a piece of wood. Pedro pops on the bike, pedals hard, and cruises right over the job – which is only about a foot high. Napoleon proclaims that he got “over 3 feet of air that time,” when Pedro clearly didn’t get more than a foot. Then Napoleon tries and immediately breaks the jump and injures himself.

Say what you want about the movie, but this bike scene is one of the ones that people remember the most in recent years.