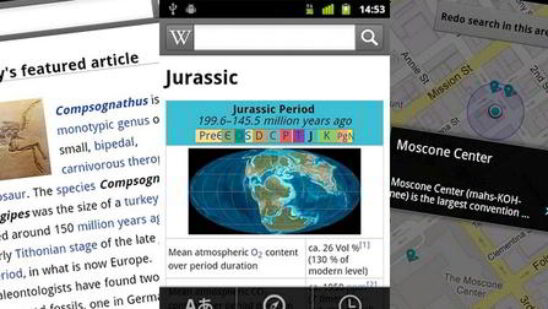 After protesting against the US legislation, Wikipedia blacked out on Jan 18, 2012, against the Stop Online Piracy Act/Protect Internet Protocol Address (SOPA/PIPA) going to be implemented in the next weeks. Many other sites like (Reddit etc) also made the same move. In the meanwhile, Wikipedia has released its official app for Android. It has been released for free for user benefit. Before recovering from its loss, it now came to the mobile market, offering its services for free.

In the past, Android users have been using third-party apps that replace Wikipedia on phones. Following SOPA Blackout, Wikipedia has now hit the Android app store.

This is the app that many users have been waiting for, the official Wikipedia app for Android. It was released on the blackout day.

It’s now possibly easy to search over Wikipedia’s 20 million articles on the web from your Android device. This app even features the Saved Articles List so that you can read them later. You can also search for articles over places nearby and has an option to share the articles. To our surprise, this app doesn’t need any internet to get the search results.

This app’s with a clean simple design. But it lacks an Edit option on the page. Tapping the menu bar, you can choose your preferred language from a huge list of 43 languages and read articles in any of these languages. You can literally build a library of Cached Wikipedia Pages.

With the Nearby Option on the app, you can move to the related maps on Google to that article. The History option works similarly to the history of any other web browser.

Wikipedia is undoubtedly the most used thing for reference and research. Though Wikipedia is looking for huge funds for its maintenance, it doesn’t feature any ads on the app or the .org page on the web. It’s looking for a donation. Donate some to the non-profit organization and let it survive for the future.