Home » Politics » Whose Really to Blame for the Drought in the US?

Whose Really to Blame for the Drought in the US? 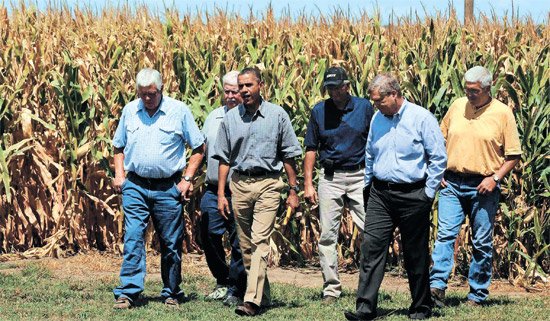 The United States is one of the world’s primary food suppliers, so when the worst drought in 40 years hit this summer, the effects were felt at home as well as abroad. Food prices have rocketed, farms are ruined and both lives and the way of life for many are endangered yet again. Record-breaking lack of snow and rain combined with the hottest July on record may have compounded years of little rain to cause the drought, but was there a way that we could have prevented the drought conditions from getting that bad. There are multiple levels of blame, from the government to water companies and from fate to ourselves. As recovery begins one must ask what was really to blame for the drought in the US, or perhaps more correctly – who?

Lost in the Pipes

This drought is certainly not the first in recent times, and many people are used to the continual warnings during times of drought-like not to water their lawns and to take shorter showers. But the amount of water that is saved from frugal practices like those is nothing compared to how much water could be saved if water companies and governments worked together to fix the simplest water wasting problem of all: leaking pipes.

It often seems hypocritical of water companies and governments to impose restrictions when we the people are not the only ones responsible for wasting water. In the United States, over 9% of all water transported is lost through leaking pipes. If all that leaking water was collected it would go a long way to helping our dry farms, failing crops and annoyed households.

The statistics are astonishing: worldwide up to 60% of water transported through pipes is lost to leaks, mainly because the pipes used are just too old. We should not just be saving water because of drought in the USA but also because water is just too precious to waste. So many people live in areas without access to clean water, yet we live in a world where it is acceptable to just let millions of gallons seem into the ground – wasted.

Droughts force us into conserving water, but why is that not something we do in the first place? There is often no need for the amount of water we use on our lawns, and we regularly observe bad practices like leave taps turned on or running dishwashers before they’re full.

Why instead of improving our behavior just during droughts do we not just observe good water practices all the time? Saving water is green, it saves money and is just plain common sense – yet we continue to waste and waste again.

Water use outside of households makes up a massive percentage of the total water use in the United States, yet it is often the worst regulated sector. Everybody knows that things like golf courses are bad for the environment and use tons of water, but fewer know that it is possible to have your cake and eat it too.

The New York Times recently wrote an opinion piece about how Las Vegas golf courses have been forced to adopt better water rules: gallons have been saved and golf courses have continued same as ever. It’s not an either-or situation: we can enjoy the conveniences of the modern world but we just need to be a little more sense when it comes to water. If we didn’t use water so much, the drought would not have hit us so hard and perhaps water would have reached where it was needed: the farms.

However farmers are not immune to criticism. It is important both for the economy and for stable world food prices that farmers get the water they need and thrive, yet too many use old-style irrigation techniques that wastewater. Farmers know that water is essential to what they do and even then they can be the worst water wasters.

So Who is to Blame?

The short answer is that we all Americans are to blame for the severity of the drought in the US. We could not change the fact there was little rain and so much sun, but perhaps if we would have conserved water better in the years running up to the drought instead of only starting when the warning signs flashed then maybe we wouldn’t have had such problems. Water is precious, and we need to work together to save it.