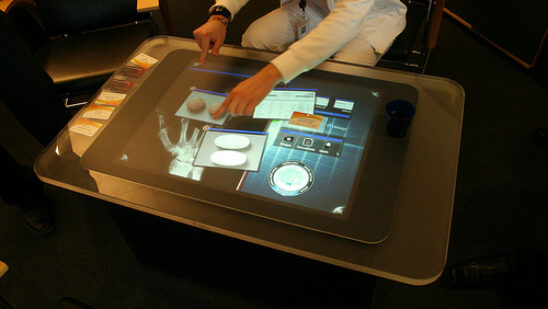 Apple has taken significant market share from Windows-based PCs in recent years and has dominated tablets since their invention, but that could change with the unveiling of Microsoft’s Surface tablet. Suddenly, Microsoft has gone from a complacent software company to a legitimate threat to Apple’s status as a portable, technological, and pop culture symbol. Of course, the only votes that matter are those cast by consumers with their wallets, but here are some predictions for the future of the Surface.

The iPad is great for playing games, watching movies, and browsing the Web, but it’s hard to get actual work done. If there’s one thing that immediately differentiates the Surface from the iPad, it’s the potential for doing real, actual work.

Not only will the Surface run the same version of Windows 8 that Windows PCs use, but the Surface’s main accessory is also a soft keyboard.

This means you can do stuff besides looking at graphs. Spreadsheet manipulation. Word processing. Secure file transfer, with a third-party provider. Maybe the Surface won’t replace your laptop, but it could come close.

The Surface isn’t going to blow up the tablet market upon launch, but it will do a lot to get rid of the pretenders in the market. You can say goodbye to all of the miscellaneous Android tablets that offer nothing original besides an attractive price.

It’s conceivable that, within a year of the Surface’s release, there will be only three main tablets left – the iPad, the Surface, and the Kindle Fire. Each has a unique niche, giving them room to maneuver in the marketplace; anyone who fails to innovate will be ignored.

Regardless of what the Surface offers, you can be sure the Surface will kick off the latest battle between Apple fanboys and Windows loyalists. We all know Apple copied the Windows operating system and Microsoft has copied Apple with its Zune MP3 player and, now, the Surface.

It remains to be seen whether the Surface has enough to debunk those who say it’s merely an iPad ripoff, but this stigma is one thing Microsoft will have to overcome as it markets its new tablet.

We all know Microsoft for its software offerings, but aside from the Xbox line, it’s done very little in the hardware world. Look for that to change in a big way, particularly if the Surface is a hit. Apple has proven that software and hardware success go hand in hand.

A company that develops the software knows what hardware runs it best, and vice versa. Microsoft had a great run distributing its software to hardware manufacturers, but if they intend to beat Apple in the innovation department, Microsoft must develop its own hardware.

The Surface is the first step in that process, and we should see Microsoft take a larger role in hardware production in the coming years.

Competition brings out the best in everything, and the upcoming tablet wars are no different. You wouldn’t be wrong if you’ve accused Microsoft of resting on its laurels in recent years, but its Surface seems to offer something different than the iPad, and different than Microsoft’s typical brand of innovation.

And with the iPad well into its third product cycle, the novelty has worn off and the market is ready to try something new. The ensuing battle should be one of the most exciting stories in the second half of 2012.