As soon as we hear of something built larger than usual, we’re automatically curious to inspect and admire its magnificence. Try and get your head wrapped around these four architectural feats so carefully perfected from around the world.

Oasis Of The Seas is the world’s biggest cruise ship that can carry more than 6,000 passengers. Explore 20 floors of entertainment and accommodation. It has seven neighborhoods with a central park of trees and flowers, various pools, a theater, more than a dozen cafes and restaurants, a mall, spa, a full-size basketball court, a chapel for weddings, and rock climbing walls. At 100,000 metric tons, it’s just a little less heavy than US Navy’s Nimitz class aircraft carrier.

No one needs another excuse to stay on Travel Weekly’s Best Overall Cruise Line for 9 consecutive years, all thanks to this wonderful architectural feat.

Nullabor Links Golf Course in Australia, the world’s longest golf course, offers a unique Australian experience. The 18-hole par 72 golf course stretches across more than 300 km of land with one hole in each roadhouse present along the Eyre Highway.

The idea is to journey from Ceduna in the south of Oz to Kalgoorlie in the west, jumping back in the car every time you complete a tee. Be careful, you may well come across dingoes, snakes, spiders, and scorpions – think of it as a golf safari. The golf course won Gold as the Best New Tourism Development in 2010 by the Western Australia Tourism council. 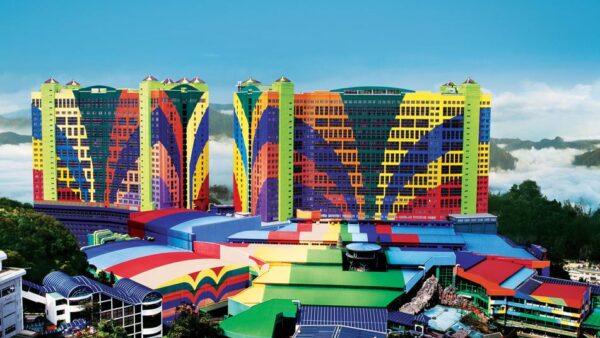 It has more than 6,000 rooms, a theme park, a cinema, a gymnasium, karaoke facilities, a casino, and a shopping center. It also houses a replica of the Statue of Liberty. Located more than an hour’s bus drive from Kuala Lumpur Airport, First World Hotel would do well to open a branch at the airport.

The largest mall is aptly located in one of the most extravagant cities: Dubai. Known as The Dubai Mall, it has more than 1,200 shops, a cinema that seats 2,800, an aquarium with an underwater zoo, and an ice rink. The aquarium is the largest suspended aquarium to date and holds 10 million liters of water.

By 2011, the shopping complex held a record-breaking 54 million visitors. Since the mall was opened, it has won five awards some of which include The Best Retail and Development Scheme and Best Use of Lighting in a Retail Environment.

Do you know of any other cool architectural feats that we missed here? Let us know in the comments section below!