Home » Gaming » The Rise and Rise of Online Gaming

The Rise And Rise Of Online Gaming 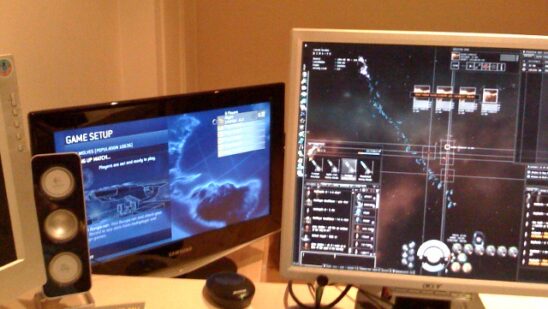 The multiplayer gaming experience completely dominates the culture and appeal of modern-day video games. Anyone that’s seen some of the biggest gaming trends will know that the world of gaming is ever-changing. The gaming industry knows that customers expect a multiplayer experience from most mainstream titles and the majority of these games are developed with the feature in mind. However, online gaming is a relatively new phenomenon in the history of video games and here we take a deep look at the rise and rise of online gaming:

The Birth of Video Games in the 1970s

Video games were not always accessible and mainstream; they were once a hobby enjoyed only by computing enthusiasts. Early forms of video games were developed by programmers across university campuses and featured simple graphics and primitive gameplay.

It was not until the development of Pong in 1972 that video games began to penetrate the mainstream. Pong was so successful, in fact, that by 1977 the market had been flooded with Pong consoles.

The Growing Popularity of Arcade Games

Pong consoles were expensive items, although there were many cheap knock-off versions available too. It was not until arcade machines were introduced that gaming became accessible to the masses. The craze started with Space Invaders (1978) and other notable classic arcade games of this period were Asteroids (1979), Pac-Man (1980), and Donkey Kong (1981).

The small coin-operated machines started appearing in shopping centers, pubs, bars, and restaurants across the country. This period also saw the birth of competitive gaming, as players eagerly spent their pockets of coins to challenge the leader boards.

How Gaming Took Off Online

Although arcade machines still enjoy popularity today, they were replaced by the home video game console in the 1980s. Atari had enjoyed some success early in the decade with 2600, but it was Nintendo who really pushed through the console revolution with the NES in 1983 and its breakout hit, Super Mario Bros. Other companies developed their own consoles and, along with Nintendo, new consoles continued to be released.

Their popularity increased over the next 20 years. However, although the video game console had found a permanent place in homes across the world, players could only play multiplayer locally; until the release of Microsoft’s Xbox.

Released in 2001, the Xbox was the first console to offer online gaming. PC gamers had been playing online since the 1990s and games like Quake, Unreal Tournament and Everquest had proven massively popular. Microsoft wanted to recreate this experience for console gamers and with Halo 2 (the sequel to the console’s breakout game), the online console gaming experience took off.

Console owners could now enjoy what PC gamers had been doing for years and they could connect and play against friends from around the world.

Online gaming is a massive industry today. Developers have built on the success and franchise games like Halo and the Call of Duty series are renowned for their multiplayer experience on consoles. Some PC games, such as World of Warcraft and Starcraft, are huge industries in their own right.

The rise of online gaming shows no signs of slowing down, with websites dedicated to offering free online basic games, including the likes of free solitaire games, as well as millions of video game players across the globe who play competitively against one another every day. Either way, online gaming has become a major part of the gaming experience and is undoubtedly here to stay.