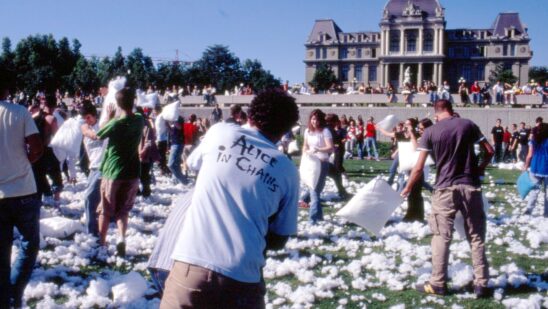 So what is a Flash Mob you may ask? It’s basically a group of individuals coming together in a public place to perform a spontaneous act, before quickly dispersing into everyday life once again. Usually, this performance is purely for the purpose of entertainment but has also been excessively used as an advertising tool by companies such as T-Mobile. Here we look at the flash mobbing phenomenon in detail:

The first European Flash Mob happened in Rome back in July 2003. Over 200 people converged on bookshops requesting books that didn’t really exist. After a quick round of applause, the crowds quickly vanished!

Many different types of flash mobs have occurred since 2003 with people constantly coming up with new and fun ideas. Some of the ones commonly found are singing and dancing events, including silent discos, pillow fights, and time-freezing events like that of the Improv Everywhere‘s ‘Grand Central Station‘.

Nowadays quite often an organized flash mob will have been pre-rehearsed by a professional group, normally consisting of performers like singers or dancers that are affiliated to a specialist body such as a dance school or choir. Originally, and sometimes still, a Flash Mob is a truly organic and social event.

Sure there’s the organizer, but the participants are members of the public who have been reached through the online world and social media. This is the best form in the opinion of the flash mob purest.

An open public space is another requirement. Space should preferably contain a large number of unwitting members of the public.

This is for four main reasons:

It’s important for the organizer not to reveal the full extent of their plans before the appropriate time so as not to alert anybody who may not wish for it to take place.

In the past Flash Mobbers have met in ‘holding pens’ such as bars and pubs close to the final venue for the Flash Mob. Whilst present in these venues they will be informed of the full plans shortly before the scheduled event.

A very popular form of Flash Mob is the Silent-Disco. The Silent Disco of today has its roots in an early event from 2006 hosted in London. People who were part of this flash Mob converged on various underground stations across the capital taking with them their iPods and other Mp3 players.

At a precise time, the participants would begin dancing to whichever song they happened to be listening to. After a certain amount of time had passed the Flash Mobbers seamlessly dispersed back into their routines. Of course, no prior rehearsal is necessary for this type of Flash Mob and as a result, it really offers out the experience to those of us with two left feet or a squeaky voice! This is a Flash Mob which allows true participation by the public.

There are of course some dangers associated with Silent Discos, not the least being theft, but most people are there simply for a good time so this should not be something to dwell on. In addition to this, there are certain risks inherent in having large numbers of people in one area.