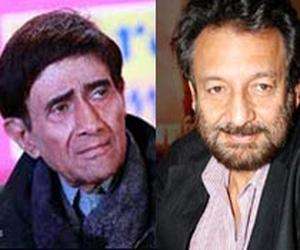 It is a very dismal moment for Bollywood right now as the legendary actor Dev Anand has passed away recently. Great prayers and condolences have been pouring in ever since the news of Dev’s death spread. The filmmaker Shekhar Kapur, who is the late Dev Anand’s nephew and debuted as an actor in his ambitious project Ishq Ishq Ishq in 1974, shared some interesting moments from the film’s set in a post on his blog.

“Tiny role, but hey, I got to romance Zeenat Aman, who had changed the very perceptions of what it meant to be a modern Indian girl to all of us.”

Film-maker says that the film “Ishq Ishq Ishq” was shot in Nepal for over two months, trekking all over the mountains. He wrote:

“We hardly saw Dev Uncle (every one called him Dev Sahib but me). Even Zeenat! Although she had this special way of purring “Devvv Sahiiib” with a flash of her incredible eyes that told their story immedietly. And his sing song ‘Zeenieee’ would just confirm the story. But her ‘Devvv Sahiiib’ would be up at 4 am every morning ready with make up and announce we were going to be on the move again to another location. He would rally his reluctant troops and before you knew it he was off climbing the mountains to a spot he wanted to shoot from 10 kms climb away.

The crew would groan and moan, but follow the leader. He was always the first one there, and would already be in his pitched tent writing the scenes for the next day by the time we got there. He must have been about 55 at that time.”

Unfortunately, the film did not do well, despite Dev Anand investing almost all of his money into it. Shekhar describes:

“Money had no value to him, except to make films. Nothing else interested him really. On this evening he was talking calls from the press and the distributors. As always they started with excited congratulations and jubilations. His face sparked with excitement and joy. But over the next two hours, the tone changed. I could not hear what was being said, but I saw it on his face. His voice going softer. That spark that was Dev Anand dimming. In a couple of hours and a hundred calls later the reality overcame the dream. The film was a disaster on the box office.”

“Then the calls stopped. No one called and the loneliness of failure hung in the room. Dev Anand has just lost everything. All his money and everything he sold to make his most ambitious project ever. There are few more intimate moments you could share with a courageous man than his coming to terms with complete defeat. He was sad. Reflective. For all of five minutes. He then looked at me and smiled.”

Dev Anand then told him:

“I’ll just be back ‘Shekharonios’ (thats what he called me) and went into the bedroom of the suite. I should have felt sorry for my first foray out as a (minor) actor flopping, but was too caught up in the incredible drama unfolding in front of me.”

“Ten minutes Dev Anand emerged. His his eyes were vibrant. His face excited. He was unable to sit down for his excitement. Looked me in the eyes. ‘Shekharonios, I just thought of a great plot for my next film!!’ He picked up his register. Took out a pen and started to write. How does a man who just lost of everything come to terms with it so easily? I was left gaping. But knew it was time for me to leave him alone. To write and plan his next film. He never talked about Ishq Ishq again.”

“But the Dev Uncle I did not know. The Dev Sahib, the Dev Anand that the world did not know, was the man coming to terms with himself in 10 minutes in that room. We will never know maybe that’s what true Karm Yogis are. People we cannot fathom from our own lesser standards of courage.”