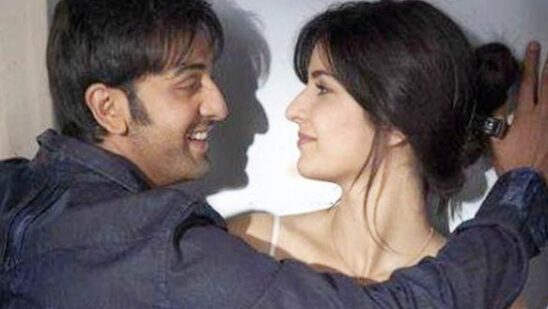 The beauty queen Katrina Kaif and Ranbir Kapoor never accepted their involvement in each other. But they both can’t deny the fact anymore. On Sunday night Katrina and Ranbir were indulged in some serious PDA on an international flight LH 576 from Frankfurt to Mumbai.

The host of Radio One Malini Agarwal reports that her friend witnessed the lovebirds (Ranbir & Katrina) first hand, as she was also seated in the same row of the first-class cabin. Kat-Ranbir were seen holding hands and even exchanging a kiss.

According to the eyewitness report:

“The first class had many European businessmen, and not too many passengers recognized them. Katrina was wearing a casual T-shirt and jeans and had no make up on.”

“Initially she kept looking around to see if there would be any familiar Indian faces, but when she saw that wasn’t the case, she got comfortable in her seat and started talking to Ranbir. After the flight took off, they cozied up and Ranbir & Katrina was seen planting kisses on her cheek and she didn’t seem to mind at all.” Besides the enjoyment of first-class services, they also used the time to get some work done.

“There were a couple of scripts piled up on their table. They both engrossed themselves in them. At one point they were even reading out their parts out loud, as though they were rehearsing. Ranbir later called for some blankets, but neither of them was seen taking a nap.”

Ranbir & Katrina were in Amsterdam shooting an ad for a newly endorsed product, while Kat had joined him to spend some time.

The two were planning to get away from the city for a while, and this seemed like a perfect opportunity. Especially since Salman Khan is out of the country shooting in Bangkok for a 50-day schedule.