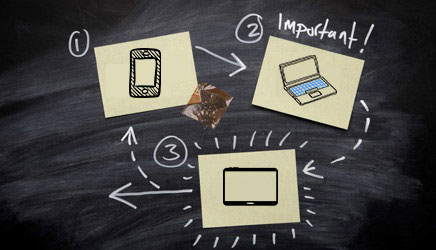 Smartphone users have topped the 6 billion mark which has given rise to a new question, have smartphones killed conventional web design? Potentially one of the fastest-growing areas of the mobile industry, the popularity of these devices is only expected to increase with their ability to connect to the Internet one of their biggest attractions. This means their influence on web design is also set to continue and so does the competition to have the best website. Yet before we can answer whether they have killed conventional web design we must first define it.

Many of us will be tempted to read the title and wrongly think that “conventional web design” means “pre-responsive days”. This is not correct and desktop design has always been responsive.

We, designers, have always had to deal with and design for multiple-sized screens and browser sizes, so our designs should have been responsive from the outset; even before monsieur Ethan Marcotte defined the term and printed a whole book about it, you only have to have a look at some of the latest designs to see how the designs work for all the different sizes.

Yet, conventional web design focuses primarily on the desktop PC and the requirements it has. For modern developers, this target audience may no longer be the main address and the advent of smartphones has expanded the ballpark somewhat.

Establishing the impact this will have on web design is vital for those involved in the process and requires more than a simple comparison for responsible mobile design. Instead, looking at the exclusive demands of mobile web design and establishing whether there is still a place for conventional design in this modern world is needed.

Below are a few ways in which the online market has begun to change and an analysis of how smartphones may have prompted the change:

The major difference between mobile phones and computers, other than their primary function, is their technical specifications. In terms of processing power and memory capacities, desktops will always outperform smaller smartphones.

In relation to web design, this means that pages can take much longer to load due to the long process which is involved. Essentially, your phone downloads the larger image before compressing and resizing it to fit its individual screen. The image is uncompressed using the phone’s memory and for every pixel, approximately 3 bytes of memory are used. For the average image (1024×768) this equates to 2.36MB.

This may not seem like a great amount but when the average user requests a minimum of 4 images at a time, this pushes the figure to almost 10MB – a serious drain on your phone’s resources.

However, if your project requires images to be resized then you can use tools such as RIOT or imgble: a web-based tool that could help you resize your images to best fit a mobile device screen. This is a great compromise and can ensure that you are able to view web pages to the best of your ability without compromising your phone’s memory or CPU capacities.

Whilst computers and laptops may still dominate the world of e-commerce and online shopping, the ability to use smartphones for this purpose is only set to increase. In order to cope with this growth, web designers will need to ensure their shopping carts and online payment systems are smooth and fast. The smaller capacities of smartphones also need to be taken into account and security will naturally be a prime concern.

The implementation of security features is paramount to the success of mobile shopping sites, with options to store card details perhaps the biggest area of concern. Ultimately, a balance between convenience and security must be found and the shopping experience for mobile users must be as smooth as it is for those accessing sites via desktop PCs and other static devices.

All web development, whether for a smartphone or a PC, relies on web coding or web languages. HTML and CSS are the main forms of coding currently in use, with HTML5 the latest version.

Other languages, such as PHP, XML, Java, Javascript, and ASP are also in operation. These are primarily associated with desktop PCs and static computers but similar languages are used in the mobile world. Essentially, the back-end of the web design remains unchanged across the formats with plug-ins used to make the pages compatible with mobile phones.

Instead, what changes within mobiles is the content and the navigation. Auto-fill forms which utilize HTML5 are a great addition and navigational links must be easier to identify and use. Content should be void of large images, with text displayed in a readable format. Multi-column layouts should be largely removed, keeping the content clean and concise.

Overall, this means that smartphones have changed the design of web pages but not the development or implementation. Traditional web design has therefore evolved, rather than been eradicated.

The Rise of Mobile Apps

The rise of mobile apps is also set to continue at a fast pace, with businesses pressured into creating applications that facilitate key functions and access to their online services when accessed from a smartphone or portable device.

Web developers are increasingly being assigned the job of developing mobile apps that rely on specific mobile OS languages (Objective C and Java, for example) to be used. This means both the back and front end of web development have undergone alteration, making this role one which requires specialist knowledge and in-depth study.

Overall, this means that whilst the world of web design has been irrevocably changed by the advent of smartphones it has not necessarily been killed. Responsive web design, as a concept, has been in operation for some time and this means that the adoption of this approach for web design in smartphones is nothing new. So it would be an intelligent decision to consult with a professional who is proficient at website design if you’re unsure as to how to proceed with phone web design.

The changes in web design stem from the varying demands of smartphones – with the size the main area of change. The spatial restrictions of smartphones have prompted a significant change in web design but this does not mean traditional values have fallen by the wayside. Instead, as with all developments in the world of technology, the features for the new devices have been incorporated within the original – altering, but not killing, conventional web design.

In many ways, these developments mean that traditional web design will become a thing of the past. Whilst designers will still need to consider how their webpages look on traditional formats, such as computers and laptops, the focus will more than likely be placed on mobile platforms which have greater scope for progression.

The future of web design could, therefore, see a shift in focus from overall aesthetics to specific requirements. Creating multiple web formats for use with varying devices is almost guaranteed to become the norm for businesses and there is likely to be a greater focus on web code and how it translates onto mobile devices.