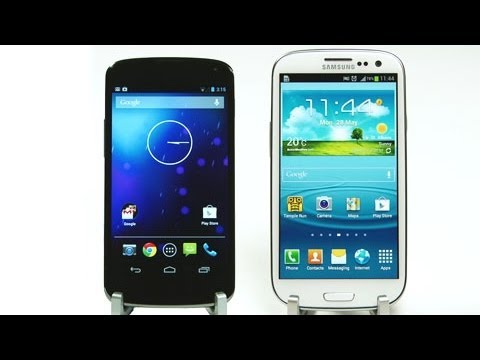 For some time Samsung has been seen as the premier smartphone manufacturer in Korea. The Galaxy series has been widely lauded as excellent smartphones the world over, though it should be noted that there are regional differences in processors and features (depending upon the mobile phone deals offered in a particular region). The Google Nexus 4 is an LG phone. Swiftly following up on the success of the LG Optimus G, LG has entered the market again with this Nexus-branded phone. Historically LG has got some criticism for their phones for being clunky and problem-ridden. They seem to have ironed out the creases and their Google partnership could catapult them high in the market. Let’s analyze Google Nexus 4 vs Samsung Galaxy S III in detail:

To be honest neither of the smartphones would excite users stylistically. They are both a bit bland and lack design innovation. Samsung is more curvaceous and is perhaps a little more attractive. It is certainly very nice in the hand.

The Nexus 4 looks more premium, with its glass on the front and rear making it look expensive, the finish is susceptible to smudging though. For many users, the glass of the Nexus would easily win over the plastic of the Samsung.

Both smartphones have their keys for powering on and volume in the same place and both sets are responsive and functional. They both have 3.5mm headset jacks, micro-USB ports, and noise-canceling mics.

Both also have 8-megapixel rear cameras with a flash. On the front, the Nexus 4 loses to the Galaxy S3 with a 1.3 vs a 1.9-megapixel camera.

The Samsung Galaxy S III is certainly more flexible than Google LG. It has the option to remove the back and expand the memory with a microSD card or replace the battery. This is a definite plus.

Both of these flagship smartphones offer screens that are of the highest order in all regards. The Galaxy S 3 has a 4.8 inch 720 X 1280 HD Super Amoled which is a real genius piece of kit with overly saturated tones of color and reproduction that includes deep black. It will wow your friends. The superior color accuracy and realism of the Nexus 4 shines through in its WXGA 768 X1280 True HD IPS Plus screen.

Practically speaking both screens perform with similar success. You really need to choose between vibrancy in the Galaxy S3 and the realistic tones of the Nexus 4 combined with better outside visibility. It is a personal choice.

For us, the vibrancy and the superior sleekness of the Samsung S3 wins over the Google (LG) Nexus 4 when it comes to the Nexus 4 vs Galaxy S III comparison. In terms of ratings, the Google Nexus 4 gets 9/10 and Samsung Galaxy S III gets 9.5/10.

You can certainly disagree, as they are both great smartphones nonetheless!