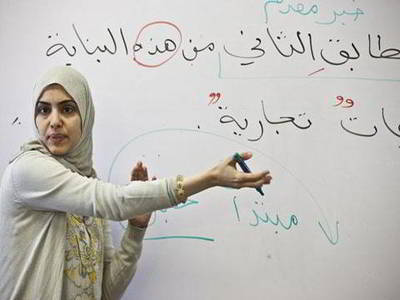 The first Muslim college in America quietly began classes this week, amid the continued fervor over the proposed Islamic center near Ground Zero and Burn A Quran Day. Founded by three prominent Islamic scholars, Zaytuna College (Zaytuna means “olive tree” in Arabic) in Berkeley is a small school with just five faculty members and 15 students in its inaugural freshman class. The school plans to become the first fully accredited Muslim academic institution in the United States.

A visit to the campus reveals a pretty standard California college scene. Students walk across a sunny courtyard into classrooms and pick seats next to friends. But on this campus, the women sit on opposite sides of the auditorium from the men, who are most heavily bearded, heads covered in skull caps. Only one woman’s hair is visible. The rest wear modest Islamic scarves.

The college emphasizes a rigorous general education in American history, anthropology, philosophy, literature, and political science, but a major portion of its required curriculum is devoted to the study of Islam and the Quran.

Imam Zaid Shakir the founder and a professor at Zaytuna College said:

“We want to manifest Islam in a way that’s compatible with America. People who are trained and educated right here, who understand the nuances and complexities of our society. And who also are comfortable with their Americanness on the one hand and comfortable with Islam on the other hand.”

Despite its un-provoking location as opposed to the Ground Zero Mosque, some conservatives have attacked the founders’ motives. Reagan-era defense official Frank Gaffney said:

“This is stealth jihad in the sense that it is about promoting in the United States incubators for sharia.”

Zaytuna’s founders dismiss such criticism, saying it represents the views of a small minority of Americans who don’t understand Islam.

“I think Zaytuna College over time can help contribute to a healthier understanding of Islam by removing ignorance. The college is seeking to prepare morally committed human beings that can go out and make a difference in the world as Muslims.”

Zaytuna is housed in rented classrooms at the American Baptist Seminary of the West, just a few blocks from the University of California, Berkeley campus.

“Religion is the main part of my life. I have religion and then everything else comes around that. So that was definitely the main reason I wanted to come to Zaytuna.” said Sumaya Mehai, 21, who spent two years at community college in Santa Barbara before enrolling at Zaytuna.

Zaytuna, where tuition is $11,000 a year, offers a bachelor’s degree with two majors: Arabic language and Islamic law and theology. Students take classes in subjects such as Islamic ethics, Islamic finance, and Muslims in America, as well as courses one finds at a traditional liberal arts college such as Sociology, Philosophy, Linguistics, and Astronomy.

Islam has never become rooted in any land until that land had its own Islamic scholars and that is precisely the goal of Zaytuna College.