Everything You Need To Know About Celeb Holiday Accident Scams 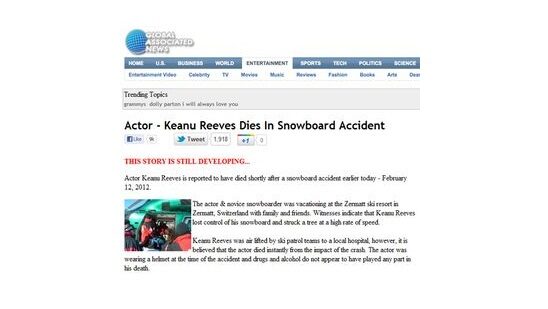 Online scams are making the headlines – and as many of these have recently involved lurid and untrue stories about celeb deaths in holiday accidents, online audiences should be on the alert for shock-horror holiday accident stories going viral. Scam stories have one purpose – to direct users to that website. Earlier this year, a Facebook scam involved a story about Arnold Schwarzenegger dying in a snowboarding accident – which followed on the heels of the scam Keanu Reeves dies in a Snowboarding Accident.

The website was using fake stories about celebrity deaths to attract traffic – and also advertised a ski resort.

The fact that every celebrity who visits reportedly ends up meeting a sticky end might be thought of as something as a PR home goal for any holiday resort, but nevertheless, celebrity deaths in holiday accidents are big news and attract traffic to fake websites, which are often designed to look like genuine news sites.

Social media like Facebook has in the past been used to break the news of accidents or deaths among friends – but celebs are surrounded by a network of PR and management, so unless someone else on the slopes was there and had the foresight to tweet or post, any report of celebrity injury or death which does not come through a bone fide press organization like the Press Association or Reuters is unlikely to be true.

The site which announced the death of Keanu Reeves and Arnie’s termination also carries a notice proclaiming it is a fake site – but not until you have trawled through the details of how the celeb met their end.

It would be very unusual for a celeb’s management to announce their death through a skiing website, however!

Celeb accidents and injuries are carefully managed and usually, a Facebook user will find out well after the emergency crews, local police, the victim’s family, the coroner, the Foreign Office (for UK citizens) and Her Majesty’s Press have been informed.

Holiday accidents are on the increase, however – for both celebs and less famous holidaymakers.

In sun and romance hotspots like Ibiza and Majorca’s clubbing resort Magaluf, as many as 10 British holidaymakers every day end up in casualty as a result of the increase in cheap alcohol and drugs in these resorts.

The injuries of ordinary holidaymakers are more likely to be reported first on Facebook and other social media websites, as the walking wounded in hot holiday resorts tweet their new plaster cast to friends and family back home!

Tragically, however, deaths among British holidaymakers abroad have risen by 4% according to the latest Foreign Office report British Behaviour Abroad.

More young adults are dying on holiday as a result of drink-related accidents, including falls from heights and drowning accidents abroad. Genuinely tragic holiday accidents have also been in the headlines recently – young jockey Campbell Gillies died the day before his 21st birthday after going swimming on the first day of his holiday in Greece.

These tragedies are devastating for families and friends – and should act as a warning to others to try and moderate drinking on holiday and learn how to keep themselves safe. Accidents on Holiday can range from harmless to tragic however they are always a nightmare to have whilst you’re meant to be enjoying your trip.