Battle Of The Best: IPhone 5 Vs. Samsung Galaxy S3 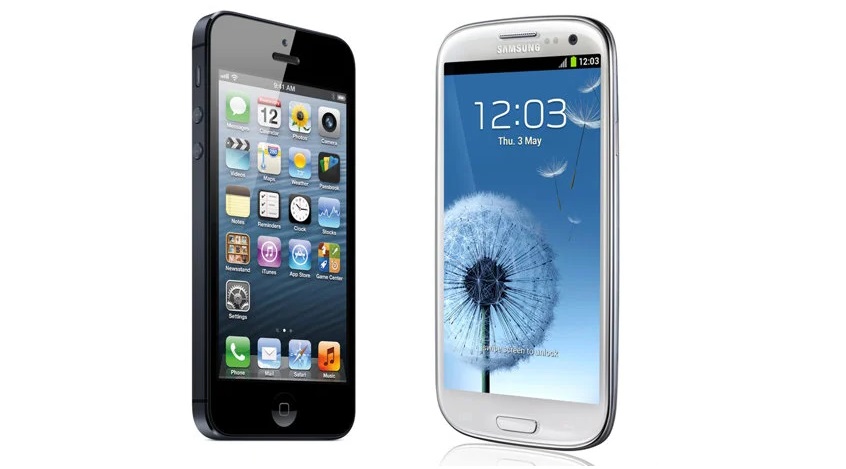 iPhone 5 vs Samsung Galaxy S3: Nunchucks, lightsabers and stand tall towers. We’ve all seen the iPhone 5 meme’s come out as soon as the phone did. With competition coming out strong against Apple in the form of the Samsung Galaxy S3 in the US market, lawsuits were thrown left and right before the release of Apple’s latest device. Although Apple managed to win the lawsuit but the popular opinion went in Samsung’s favor after a meme-inspired hoax claimed that Samsung decided to pay Apple the 1 billion dollar fine imposed on it by the jury in the form of 5 cent coins. 30 trucks laden with the loot arrived at Apple headquarters, upon which the current CEO for Apple received a call from his Samsung counterpart – saying that the payment had been delivered. Samsung, after the patent defeat, decided to go for aggressive marketing tactics to get back at Apple by directly ridiculing the iPhone 5 in its latest ad: 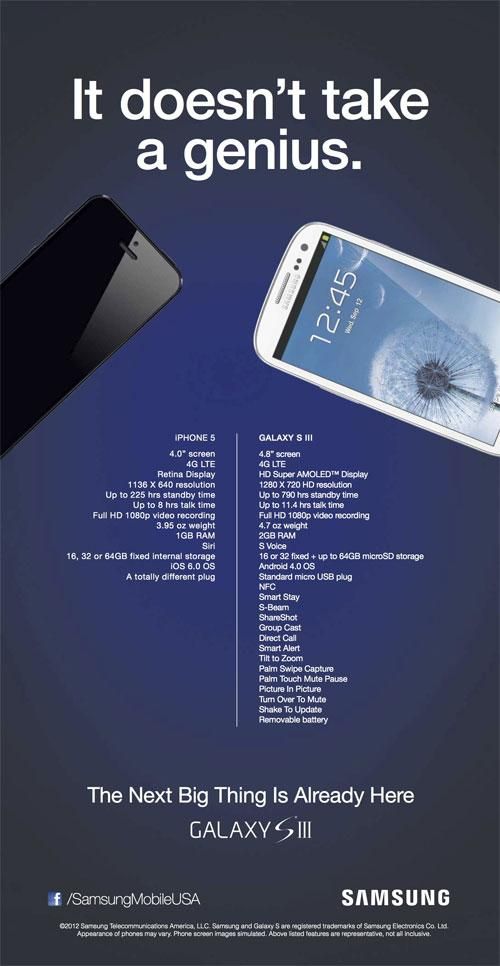 With the release of its latest device, both flagship phones are now out in the open to take each other on. Let’s take a look at the specs to see what each one has to offer: 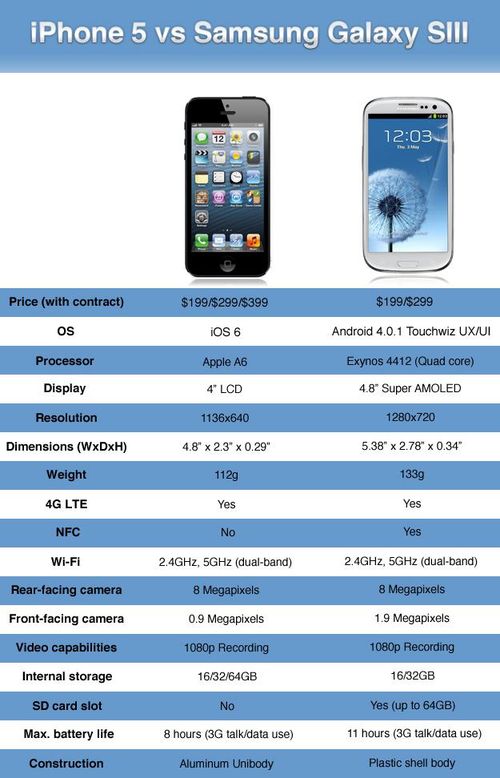 Both phones seem to cover the same ground when it comes to bandwidth, with the iPhone 5 now also holding LTE capability. The S3 falls short in this case, allowing only regional coverage. For countries such as Chine, Cuba, Israel, Germany, Egypt, and Pakistan where service providers are still functioning on 3G technology at best, these two rivals bring the same capabilities to the table.

Larger and heavier in weight by 11 grams, the S3 sports a 4.8-inch display with a slightly better resolution of 720 x 1280 pixels with 306 ppi pixel density than iPhone 5’s 4-inch screen which offers a resolution of 1136 x 640 with 326 PPI pixel density. However, the pixel quality (the brightness and number of colors each pixel can take) of the iPhone 5 is better than Galaxy S3’s HD Super AMOLED display. The higher pixel density of retina display also offers a much finer display than the AMOLED screen.

With double the amount of RAM (i.e. 2 GB RAM in some versions) as the iPhone 5 (which reportedly has 1 GB RAM) and an expandable memory slot, the S3 certainly has an advantage over the latest iPhone. Bluetooth connectivity, however a simple feature it may seem, is immensely limited in the iPhone 5 as always, with connection possible to only iDevices.

The S3 is powered by a quad-core processor as compared to the iPhone 5’s dual-core A6 chip, but that doesn’t mean S3 has any advantage as recent tests have found A6 to be outperforming all its contemporaries. The test also verifies Apple’s claim of A6 is twice as fast as its predecessors.

Both flagship devices carry powerful 8 MP cameras with the ability to record video in Full HD (1080p) and take pictures while recording video. Touch focus, geo-tagging, face detection, panorama, image stabilization, and HDR are just a few of the features that both devices provide. As far as rear looking cameras go, they both finish at the same point on the line. The S3’s forward-looking camera, however, is more powerful, coming in at 1.9 MP compared to 0.9 MP for the iPhone.

Tilt the S3 back and forth while viewing pictures and you zoom in and out. Swipe the screen and you take a screenshot. Cover it when getting a call you don’t want to pick up and it goes silent. None of that was present in the S2. With two extra sensors for detecting direction and air pressure, you get to use apps that you even can’t have for the iPhone 5.

The iPhone 5, on the other hand, offers a better and upgraded product (literally the best iPhone yet!) but it doesn’t bring any innovative idea (for which we have always been praising Steve Jobs)!  Apart from the beefed-up hardware and the phone being longer and thinner, the only new thing we have got is a new ear pod and a new connectivity port (yap, that means that all those cables for all previous devices just don’t work on it unless you attach a convertor). The new iPhone 5 also sports something that the S3 doesn’t which are its 3 microphones so the guy on the other end can hear you better.

As far as a final verdict on innovation is concerned it is a matter of personal opinion as both the phones offer something new and original. However, iPhone 5 has nonetheless not impressed much as far as innovation is concerned (an opinion shared by even die-hard Apple lovers and developers as they had retina display with iPhone 4, Siri with iPhone 4S etc but nothing such as iPhone 5 to play with).

It is really difficult to call any one of the two to be better than the other. Both offer several enhanced features, hundreds of sweet tweaks and hundreds of thousands of addicting apps that have been downloaded in billions. An Android user would love Android 4.1 Jelly Bean whereas iOS 6 would equally impress any iOS user. So far both seem to match the expectations of their respective fan base.

If you are an Android user, pick S3 and your life would change for good!

Similarly, if you are an iOS user, pick iPhone 5 to experience the best iPhone yet!

In case you are going to get your first smartphone, go with the flow! Buy the one which has maximum sales (let it even be Lumia 920) – as this is the safest way to make a good decision. The majority can’t be wrong, right?