5 American Politicians Who Could Never Pass A Background Check

If you thought celebrities had a lot of brushes with the law, just wait until you read about what some of our politicians have been convicted of. And what’s more, these were all folks who were occupying positions on the federal level. It appears background checks were not always in fashion judging on how some of these politicians have secured such high-profile jobs. Most of us have been subject to an employment background check. Sadly, some are done in an error-strewn manner which is why legal action is often the best course of action. Some might say the politicians on this list have had an easy ride, their crimes can only be described as shocking.

Unearthing a Politician’s Past

We all know how embarrassing it can be for a campaign when a candidate fails to be properly vetted. Isn’t that right, John McCain? It’s no secret that politicians are under tremendous amounts of scrutiny by reporters, as well as the general public. When a candidate is running for a high ranking position, every move they’ve made since the day they were born is going to be uncovered.

With our current president, Barack Obama, certain sectors of the public demanded to see his birth certificate! We are absolutely obsessed with uncovering all the down and dirty details of a politician’s life, either because we want verification that our elected officials are as truly awesome as we think they are, or because we are looking for ammunition to take them down, there exists an endless list of reasons why we should conduct background checks on the folks in charge of public policy.

Even if someone’s record is clean, something about the world of politics brings out a person’s sketchy side. Here are some famous American politicians who could never pass a background check:

Kent was a U.S. District Court judge who, in 2009, was sentenced to 33 months in prison for obstruction of justice because he lied to investigators about sexually abusing two female employees. But wait, before this conviction which forced him into early retirement, in 2008, Kent was indicted on three federal counts of abusive sexual contact and attempted aggravated sexual abuse.

This sex offender certainly exercised very poor judgment when it came to professional conduct, yet somehow he continued presiding over federal cases for a whole year, and only “resigned” because he got caught again! Too bad nobody did a background check on this judge.

This guy was high up in the chain of command occupying various White House positions like Assistant to the Vice President for National Security Affairs and Chief of Staff to the Vice President of the United States and Assistant to the President during the administration of President George W. Bush. Unfortunately, this security adviser didn’t have a firm grasp on self-censorship because in 2005 he was indicted for leaking information on an undercover CIA officer, Valerie Plame Wilson, while she was still active in the field.

This slip put her life in immediate danger, forcing the CIA to remove her from her assignment, compromising an on-going investigation. Libby was ultimately indicted on five counts relating to the Plame affair: Two counts of perjury, two counts of making false statements to federal investigators, and one count of obstruction of justice. Libby resigned from all three government positions immediately after the indictment was announced.

Allen held the title of Assistant to the President of the United States for Domestic Policy during the George W. Bush era. Just a year after Allen was appointed to this prominent White House position, he resigned under rather curious circumstances. Just one month after his abrupt resignation, news broke that Allen had been repeatedly stealing from retail stores such as Target and Hecht‘s in a personal refund scheme.

Allen was cited by police for shoplifting in 2006, which triggered an investigation that resulted in his arrest on multiple felony counts of theft later that year. This is perhaps one of the strangest cases of criminal conduct by a politician because Allen was earning an estimated $160,000 annual salary at the time he was stealing from Target. What’s the deal with rich people getting arrested for petty theft? May be Winona Ryder can help us answer that one. . .

Jefferson was a member of the U.S. House of Representatives from 1991 to 2009 for a grand total of NINE terms! In 2009, Jefferson was sentenced to a staggering 13 years in federal prison for various counts of bribery, making this the longest sentence ever handed down to a congressman convicted of a crime. In 2006, the FBI started catching on and raided Jefferson’s congressional office.

His constituency either didn’t care or didn’t know because he still got re-elected after the raid! He has begun serving his time in prison and has since filed for bankruptcy after racking up over 5 million dollars in legal fees. 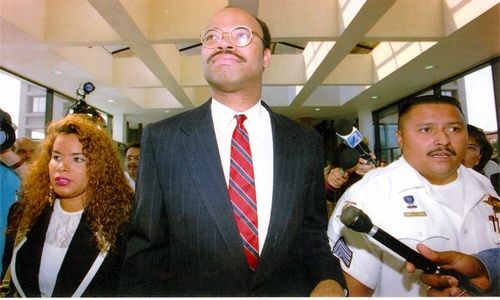 Reynolds seriously takes the cake for criminally inclined politicians. He served in the U.S. House of Representatives. In 1994, Reynolds was indicted for sexual assault and criminal sexual abuse for engaging in a sexual relationship with a 16-year-old campaign volunteer.

Like William Jefferson, Reynolds was RE-ELECTED after this indictment! Then, in 1995 it all came crashing down and his career finally came to an end when he was he was convicted on 12 counts of sexual assault, obstruction of justice, and solicitation of child pornography. Really? Did it take all that to finally end this politician’s career? On and by the way, while he was in prison Reynolds was also convicted in 1997 on 15 unrelated counts of bank fraud. Swell.

These are just some of the literally hundreds of politicians who have been convicted of egregious crimes while in office. Yet another reason why current and prospective political candidates should be thoroughly investigated with background checks so the public knows exactly what kind of people are determining policies that will impact their daily lives.