Home » Random » 120 Year Old Munni Begum Is About To Hajj

120 Year Old Munni Begum Is About To Hajj 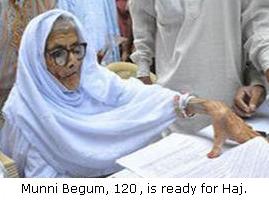 Munni Begum is 120 years old and is about to go for Hajj, after special permission as her name didn’t figure in the draw of lots.

Begum has seen three centuries (19th, 20th and 21st), and now is all set for the pilgrimage she has waited for her entire life. On Saturday she reached the office of Hajj Committee to fill the form. The Central Haj Committee officials from Delhi gave her special permission.

The Rajasthan Hajj Welfare Society has requested the Saudi Arabian government that special attention should be paid to her because of Munni’s age.

Munni Begum is perhaps the oldest woman on record to embark for the holy journey. Begum herself says:

“I wished to go for Haj ever since i was married in my teenage, and thus my wish is going to be fulfilled after over a century.”

In recent years the pilgrims have begun going at a comparatively younger age, still, a large number of Indians who go to Hejaz [Arabia] are over sixty. And Munni Begum clearly beats them as well. One hopes that along with other Hajis, she also manages to perform the Haj and returns safely. Amen.